Except it won’t be called the SC600 Camaro. That name will change once Callaway officially reveals the exact output of the supercharged LT1 engine, which is still being tested for the next two weeks or so. The SC600 name is effectively just a place-holder, until Callaway will correspond the SC nomenclature with whatever power the new car makes. Callaway says the final number will be “well over 600 hp.”

UPDATE: A closer look at the two images of the front end and the engine show “SC622” lettering, so it’s a safe bet the new Callaway Camaro will churn out 622 hp.

Fluid names aside, Callaway’s tuned Chevrolet Camaro SC600 jacks up output by at least a third compared to the 455-hp stock LT1 V-8. Leveraging its supercharger and cooling technologies used in the 757-hp Callaway Corvette Z06, the new engine includes a 2300cc TVS supercharger, which is 32 percent larger than the unit used on the Corvette Z06. The blower sits on top of an opening in the hood, as in past supercharged Callaways, allowing it to stay cooler and receive more direct air flow. The supercharger itself is complemented by a triple intercooling system and a cold-air intake system.

It promises to look pretty damn cool, unlike the phoned-in Photoshop job in the provided photo above. Visual upgrades for the SC600 Chevrolet Camaro include carbon fiber engine covers, Callaway badging for the interior and exterior, door sill panels, embroidered floor mats, and unique key fobs. 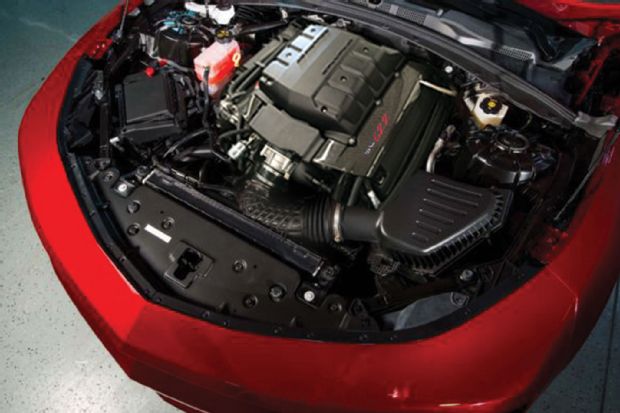 After driving the SC627 Corvette, editor-at-large Art St. Antoine said that the “2015 Callaway Corvette SC627 looks different, drives different, feels different. Speed of a different color, but refined and civilized just the same.” We expect the same satisfying flavor from the SC600 Camaro, no matter what it ends up being called.