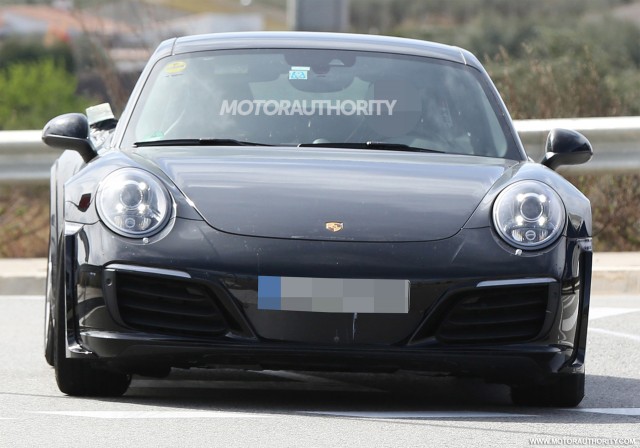 Porsche is out and about with test mules for its next-generation 911.

This may look like one of the many prototypes we saw for the recently revealed 2017 Porsche 911, but if you look closely you’ll notice the vehicle sports a wider track at both ends. This is evidenced by the wheel arch extensions. These extensions aren’t for wider tires as the tires used here are the same size—305/30—as the ones on the 2017 911.

With the all-new 911 not due out until sometime in 2018, there are few solid details on the car. We know it will ride on a new modular sports car platform being developed by Porsche. The platform will allow greater flexibility when it comes to positioning of the engines and suspension hardware. It will also enable Porsche to finally add hybrid technology to the 911.

The platform will also underpin next-generation versions of the Boxster and Cayman and possibly the next-gen Audi R8 as well as Lamborghini’s replacements for the Aventador and Huracán. We’ve also got our fingers crossed for a new mid-engine supercar from Stuttgart. While all of these models are mid-engined, the 911 will retain its signature rear-engine mounting. Just don’t be surprised if said mounting is closer to the center of the car than in previous generations.

Expect the new 911 to be introduced in base Carrera and Carrera S variants for the 2019 model year. They should feature the same twin-turbocharged 3.0-liter 6-cylinder engine that debuted in the 2017 911. At present, the engine delivers 370 horsepower and 331 pound-feet torque in the Carrera and 420 hp and 368 lb-ft in the Carrera S.

Stay tuned for an update.