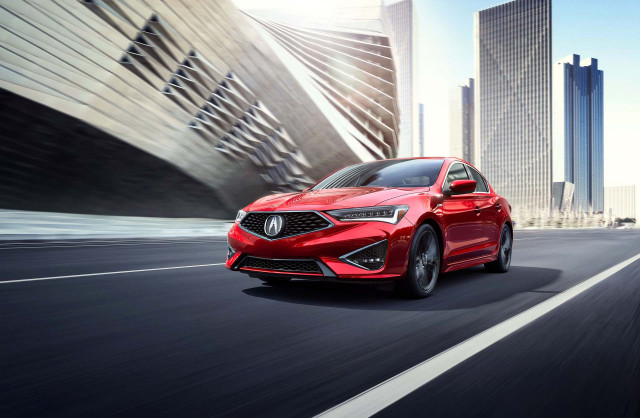 Acura’s ILX enters the 2019 model year with a fresh set of clothes, representing the second time the compact luxury sport sedan has been updated since its 2013 debut.

The latest tweaks inject the ILX with some much-needed aggression and adds the corporate “diamond pentagon” grille that we first saw on the Acura Precision concept unveiled in 2016 and already featured on most of the brand’s lineup.

There’s also the availability of an A-Spec appearance package that gives the ILX its sportiest look yet. The exterior of the ILX A-Spec is distinguished by dark chrome accents and 18-inch wheels while inside there’s a graphite-silver dash accent, A-Spec badged steering wheel with contrast stitching, aluminum sport pedals, and the choice of black or red leather.

All 2019 ILX sedans feature an updated interior. There are newly designed seats front and rear, and these are available with contrast piping and stitching. All versions also feature power adjustable lumbar for the driver’s seat, as well as new graphics and response times for the 7.0-inch infotainment system. The system also features Apple CarPlay and Android Auto smartphone integration.

Unfortunately there aren’t any changes to the powertrain which remains a 2.4-liter inline-4 delivering 201 horsepower and 180 pound-feet of torque to the front wheels. The sole transmission is an eight-speed dual-clutch unit with paddle shifters.

The 2019 ILX is due in dealerships nationwide in October. Pricing hasn’t been announced but should start close to the 2018 model’s $29,095 base sticker.

For more on the Acura ILX, read the in-depth reviews at The Car Connection.